I snapped many photos while wandering Haifa last week, as I always do whenever I see something new or interesting while exploring a city. I was with my friend Tyler, who conspicuously does not take photos while exploring a new place. I asked him why, and his answer was, "It's a distraction, and I can find better images online."
The first half of his answer really resonated with me. I too find it distracting to document something in the midst of experiencing that thing. It disrupts the "flow" of a moment, and when you zero in on something, it narrows your field of vision and can cause you to miss other interesting details just outside of the frame.
The second part of his answer made sense, too. During that conversation, we were facing the famous Bahá’í Gardens. I'd snapped a photo just moments before, and he's right that the photos of the gardens I found online are far more spectacular than whatever I shot with my cell phone (despite what the Shot on iPhone ads may lead you to believe).
To pile on the anti-photo train just a bit more, I'd add that taking photos can be rude to the people you're with. Live-documenting a moment—whether in the form of incessant photography, live tweets, or even old-fashioned pen and paper notes—subtly signals "I care more about how my future self reflects on this moment (or, worse, what the internet thinks) than about the experience you and I are sharing right now." 1
In other words, I agree that photos can be distracting and unnecessary, not to mention borderline rude. So why do I take photos?
I love capturing the little moments of daily life that happen at street level as I'm wandering around a city, whether it's a new one an ocean away or my own neighborhood in San Francisco. These are very different from the photos of the Eiffel Tower that every visitor to Paris has somewhere in their phone camera, different from the ones you'll find on travel guides or city government websites. You can't easily find the pictures I want on Google Images. I've yet to find a consistent good source of photos capturing exactly what it is that I find interesting on a city street, the sort of thing that I want to include in my City Reviews exploring the effects of infrastructure, culture, geography, and history on the day-to-day life of people living in that place. The only alternative is to capture them myself.
Even if I don't use the photos directly, they also help reconstruct my memory palace later. I enjoy reflecting on the places I go and researching more deeply the observations I noticed there, but I often lose the pointers to those memories in my mind. The memories are there, but they're hard to retrieve without some trigger to resurface them. Flipping through my photo album can jog my memory and take me deeper down a rabbit hole. 2
Photos also capture only a small part of how it feels to be in a place and time, so it really matters to me that I know exactly the context of where a photo was shot for me to be able to appreciate the place-ness of that photograph. When I'm writing about an Urban Chasm I experienced in Barcelona or a Narrow Street for People in Saigon, I want to recall the fabric of the city around it to begin to understand how it fits into the city system as a whole. I don't want just any Parisian street corner; I want the specific Parisian street corner where I noticed all of the woven plastic cafe chairs facing in on the same little square, like an audience facing the stage of a ballet that's about to begin, and how it was a little oasis of calm despite a major boulevard one block away because of the geometry of the buildings and the crooked little streets.
I have my own interpretation on how the world looks and feels, as do you and everyone else. The details that jump out to me differ from what will jump out to my mom, which differ from what will jump out to an architect, which differ from what will jump out to an economist, and so on. Photos are a little window into how a person perceives the world. Selfishly, I want more little windows into the way other people think, and I enjoy opening my own for others to catch a glimpse, too.
It's true that taking photos comes at a cost. But I'm willing to pay that cost3 when it's a matter of capturing something that others might overlook.
Footnotes
1 Of course sometimes that is the right tradeoff, and it can even be a sign of respect in the case of something like scribbling down notes about some insight that your conversation partner.
2 Google Maps Timeline is also useful for this purpose. It's invaluable for retracing my steps on a given day and reconstructing my memory of what I did. For example, here's my timeline map for the day in Haifa: 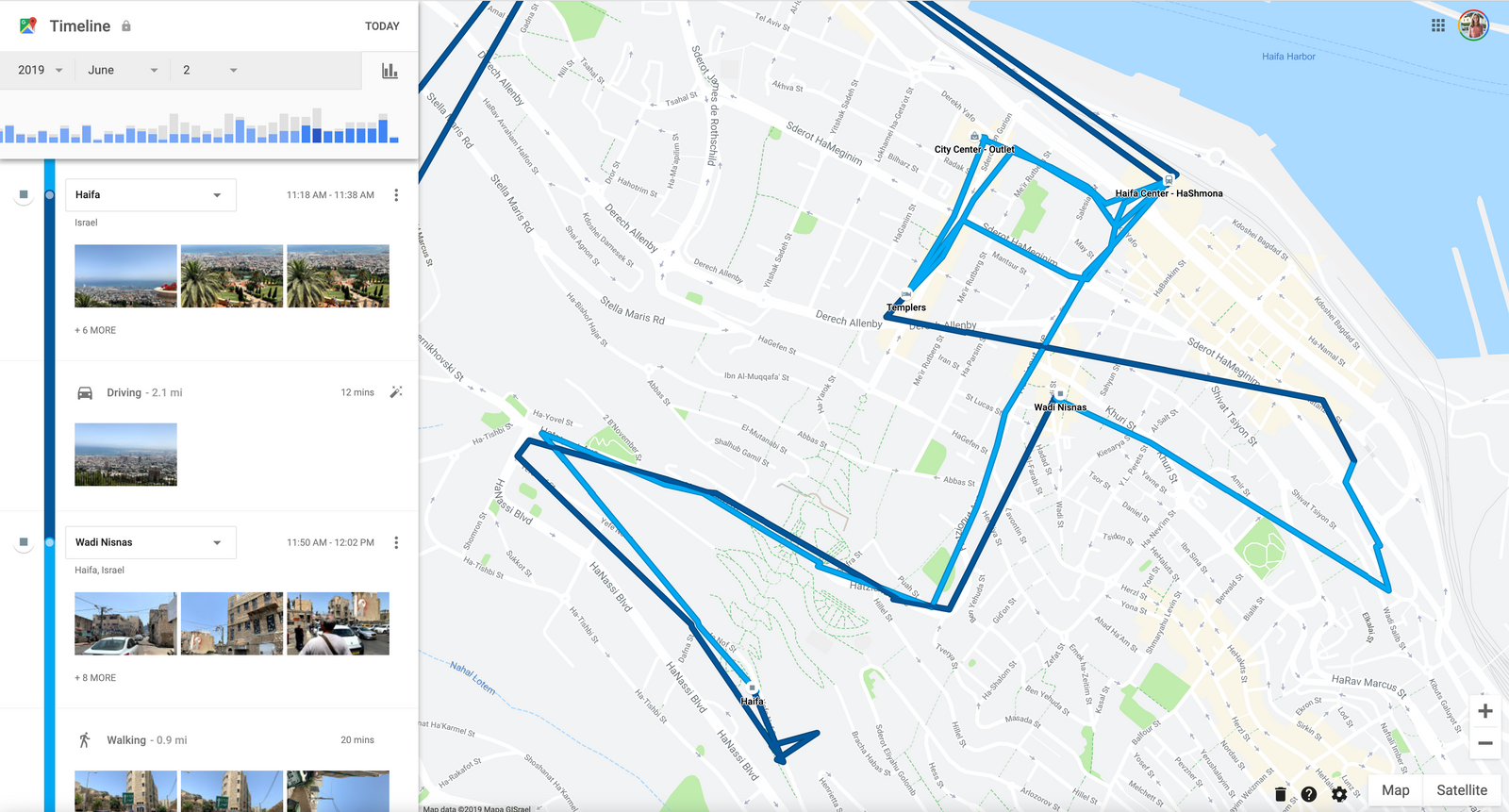 3 The conversation in Haifa did get me thinking. Most of my photos are of the individual perspective type, but whenever I end up with a famous landmark in front of me I'm in the habit of snapping the same predictable pictures as any other traveler. These photos do just diminish the experience of seeing the thing with no real upside, so in the future I will be more intentional to restrict myself to taking photos that I think i'll only get if I myself take them.
Keep in touch!