Devon Zuegel
x
I did not write this! This is an annotated clipping!
Go to source ↝

Everything is Amazing, But Nothing is Ours clipping

Back in 2015, I wrote a blog post called Dropbox: the First Dead Decacorn. At the time, it was the most widely shared take I’d ever written. I learned several things from writing this piece, and none of them had to do with Dropbox: I learned, for instance, that a great way to get people to click on your blog post is to make them mad. I also learned about a company called Social Capital, after my soon-to-be-colleague Ray reached out to me about what I’d written. I’m certainly thankful I wrote it.
Today, Dropbox is not dead. I’m glad! I certainly never wanted the business to do poorly. I used it all the time back then, continue to have friends who work there, and generally would rather not cheer for companies to fail; that’s not a great look. But I think it’s fair to say that the take didn’t turn out to be egregiously wrong. (Dropbox had last raised at a $10 billion valuation the year before, and currently trade at an 8 billion dollar market cap. So over the last five years that’s a -4% annual return, compared to the S&P at around 10%. Not dead, but hardly what I think most people pictured the next 5 years to be like.)
Relatedly, I do believe that the main idea in the blog post turned out to be correct. Dropbox was the ultimate file product. But it also hit right at Peak Files. Files aren’t the focus going forward. At the time, I wrote:
"Files are discrete objects that exist in a physical place; the internet is pretty much the opposite of that. … Dropbox might be the pinnacle of file management, but Slack is the beginning of what comes next. I don’t think files are going to completely disappear; not anytime soon, anyway. They’ll certainly still exist as data structures, deep inside our servers and our phones, for a very long time – and yet most people will be indifferent to their existence." 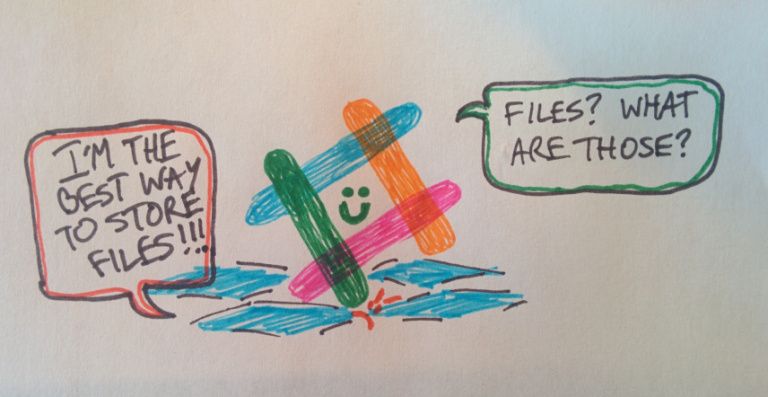