City review: A day in Beijing

I spent Monday, 5 March 2018 in Beijing. The urbanist nerd inside of me was thrilled to see China’s capital. I’d read so much about its astounding growth and change in the past few decade—finally a chance to see it firsthand! I was also excited for the food, to get a sense of daily life, and of course to build my mental map of the city. 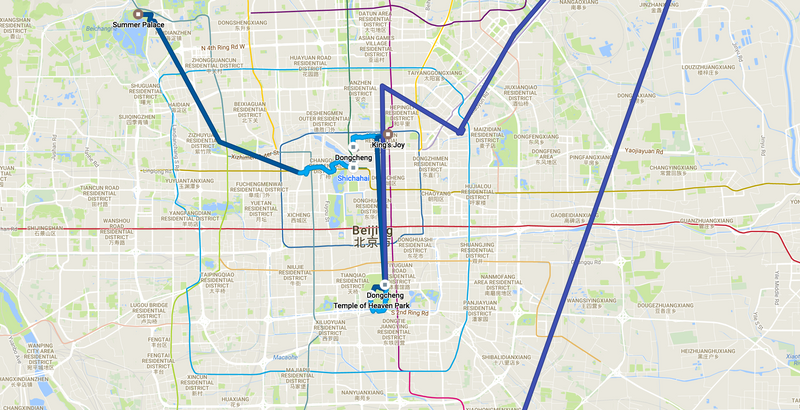 My key takeaway is that Beijing is an epicenter of cultural and technological change, but the experience of being in the city is very unpleasant. It would have to undergo dramatic changes for me to consider living there.
It’s a very no-nonsense city. The focus seems to be on destinations rather than pathways, both in the literal sense for transit and in the abstract sense. The city and nation are changing rapidly. Residents are not only willing to accept this but are also willing to sacrifice certain comforts to sustain that change. It probably helps that China was very poor and underdeveloped (and in many places still is), so it’s not so much a sacrifice as a continuation of discomforts with the promise of future improvement.
Beijing isn’t a place you really want to be outside, even in fancy areas of the city or private gardens. I usually love walking everywhere, but by the end of the day I was thrilled to get off the sidewalk and into a private car. Perhaps my experience was colored by it being a chilly day (I wore a peacoat, scarf, and gloves the entire time and was still uncomfortably cold in the late afternoon), but apparently the air was clearer than usual, so if anything I’d expect spending time outside to usually be even more unpleasant.
The city appeared to be getting richer right before my eyes. It was quite a sight to see. Unfortunately, it seems this wealth will only exacerbate the things I found most unpleasant, at least in the short- and mid-term: the traffic, the pollution, the expansion of highways.
Reading
Books
Articles
Beijing’s vehicles
There was a huge range of transport modes, and there was a clear hierarchy. Private cars were at the top, the most aspirational way to get around. For people who have to get around with flexibility and capacity but can’t afford a full-fledged car, they had these small motorized vehicles that had less insulation, far fewer safety features, lower horsepower, and worse style. Students and young people were often on bikes, though so were older people had few alternatives. People only seemed to walk if they were tourists or going to/from public transit. (Note: This is all just impressions from a single day of walking around the city, not broad a broad data-driven meta-analysis. I’d be super curious to learn more about how Beijingers make transport choices, if anyone has research into the question!)
I may have seen more different modes of transit in the single day I was in Beijing than I had in the previous 23 years of my life. Makes me wonder why it was so varied—as the first place I visited on this trip, I thought maybe it was just because China is relatively poorer than the US, so people have to be more creative with their transportation solutions. But that’s not a satisfactory answer, because the diversity was so much higher than Jakarta, Saigon, and Bangalore, which are also much poorer than the US.
The range of options was even more striking after visiting the other four cities, which had not nearly as broad a range. I’d love to look into wealth distributions of each place. Hypothesis: there’s more of a bimodal distribution of wealth in the other countries, so people either take option A for poor people or B which is cars for rich, whereas in Beijing there’s more of a spectrum.
Walking in Beijing
Pretty miserable pedestrian experience. Not captured in the pictures, but there as generally quite a bit of noise too.
Beijing on two wheels
Great infrastructure for mopeds and cyclists though. Look at those separated bikeways!!
Clever solution to chilly mornings in Beijing
Beijing underground
I was really impressed by the Beijing metro. Its wayfinding was especially notable—I didn’t get lost once, despite not speaking a lick of Mandarin!

Hutongs
The hutongs were surprisingly walkable. The rest of the city not so much. The highlight of the day was definitely wandering these older neighborhoods and peeking into the traditional, street level, family-owned shops and homes.
QR codes everywhere!
Food
I was surprised and disappointed to find I didn’t really like much of the food. (And I’m generally not a picky eater, I promise! In fact, some friends in college called me the Human Trashcan, and I bore that title proudly.)
I had really good food at a beautiful, high-end vegetarian restaurant called Kings Joy. Thanks to Flora for the recommendation! It was a very peaceful place to relax, eat, and read for an hour to recuperate after hours of walking around the hustle and bustle of the city. It was also interesting to peek into the life of wealthier Beijingers. The place was filled with well-groomed ladies with fancy handbags when I was there from 1pm-3pm.
Intense stationery shop
Doorsills
All of the traditional doorways had a board on the bottom that you had to step over. Even some of the newer buildings had these high doorsills. I wondered why this is and found some obvious answers regarding practicality (keeping out rainwater, small animals, etc) and some not-so-obvious answers:
Ancient people were mostly in loose clothes. So when they strides the doorsill, they had to hold their legs high, and the hidden weapon (if there was one) would be seen.
The linked post also says:
The cultural meanings of doorsill also plays an important part. Firstly, it's a symbol of boundary, making a distinction between your own home and the outside world. Secondly, it represented the owner's class and status; the higher status you were in, the higher doorsill it was. Thirdly, the doorsill symbolized a wall, maybe it's a bit difficult for professor Kuzmich to understand, while, you can comprehend it as western "magic," though, I prefer to regard it as a wish or will. Whatever, at the time, it really meant keeping off the dirt and ghost, hoping to keep the whole family safe and healthy. Fourthly, it's said that when people died, his soul might jump out of his house to be a ghost. In case of that, people built the high doorsill, to keep the soul in, for the soul couldn't jump so high.
These explanations are interesting, but it’s still not clear to me why this would be so common in Chinese architecture and not other traditions. Many of the explanations (especially the functional ones) seem like they would apply anywhere in the world, not just China. Any ideas why the practice would have developed here and not elsewhere? (Or has it developed elsewhere, and I just don’t know it?)
Design
To my admittedly inexperienced eye, Chinese design and architecture (both traditional and new) bear similarities with that of Japan, but I didn’t find it nearly as pleasant. The proportions felt funky to me, and it had a much harsher aesthetic. It’s beautiful in its own way, and I like that it’s distinctive, but it’s just not my favorite.
Keep in touch!