City review: A day in Bangalore

I spent Friday, 9 March 2018 in Bangalore, India, the last of the cities I visited that week. Of the five, Bangalore was the one that pleasantly surprised me the most. I had never been to India before, and I prepared myself for an underdeveloped, hectic urban experience. Its infrastructure was substandard, and it was not a sparkling metropolis like Singapore or a viscerally ambitious culture like Beijing, but it had a dynamism and cosmopolitan optimism that took me by surprise. I was uncomfortable for much of the day, but I could imagine myself making a life there and becoming good friends with the people I spoke with on the street in a way that I frankly didn't expect.
Here's where I'll admit my ignorance: going in the only real thing I new about Bangalore was that it's the tech capital of the country, but I didn't compute much beyond that. I had a hazy stereotype of what Indian cities are like (likely more shaped by Slumdog Millionaire than I'd like to admit...), and while it didn't directly contradict any of that, there was so much more dynamism and sophistication than I imagined.
Accidental Wes Anderson
One of my favorite subreddits is r/AccidentalWesAnderson. Anderson is a film director whose signature style is famous for a flatness of composition, heavy symmetry, and especially dusty pastel palettes, and that subreddit collects images that "accidentally resemble a work" of his.
Bangalore could generate endless submissions to that subreddit. Every landscape, building, and detail fit the aesthetic perfectly.
Prototypical Wes Anderson shots:
A major contributor to this vibe is that Bangalore is hazy, which I assume is due to pollution. Buildings faded into the background like mountains enshrouded in a mist. It gave everything a softness that was actually quite beautiful in a way, though gross to think about. In Beijing the air was not as visibly bad but smelled a little putrid all day long, whereas in Bangalore my breathing felt fine, but my friend said that Bangalore's air was much worse for him than Beijing's and even made him feel a little sick. So 🤷‍♀️
Colorful facades and white matte stone with colored lining are also a common choices for building materials, which visually fits into the Wes Anderson aesthetic, and the wide diversity of the jungle plants add a splash of color. It's hard to capture exactly the vibe in images, but you can get an idea:
A love letter to Bangalore's trees 💌
Bangalore's trees were my favorite part of the city. They were so lush and made the experience of walking in Bangalore quite enjoyable despite the heat and the otherwise crumbling pedestrian infrastructure. I didn't capture as many photos as I would've liked, so here are a few I grabbed from a Google image search:
Fun fact about the diversity of trees in Bangalore:

.
I felt this throughout my time in Bangalore, but Dialogues really hit it home: the city’s residents felt very cosmopolitan, educated, forward-thinking, and friendly, but stuck with crumbling infrastructure. It was like talking to someone with a lot of mental energy who’s stuck in an old persons’ body.
It was especially interesting to compare it to my experience in Jakarta earlier that week. The per capita GDP in Bangalore is $5,051 (as of 2014) while in Jakarta it is $17,374 (as of 2017), so I fully expected it to feel much further behind in most dimensions, but that was not the case at all. It felt very forward-looking and cosmopolitan, and to a much greater extent than Jakarta, despite being much poorer on a GDP basis.
Hectic streets, gorgeous oases
The next day, I spent the morning before my flight back to the States in the courtyard at the hotel. It was one of the most serene places I've ever been.
Birds chirping, water bubbling, and a nice breeze to whisk away the heat... it felt like a scene out of a Rudyard Kipling story. Fantastic way to end a long week of travel :)
For a full map of where I went throughout the day: 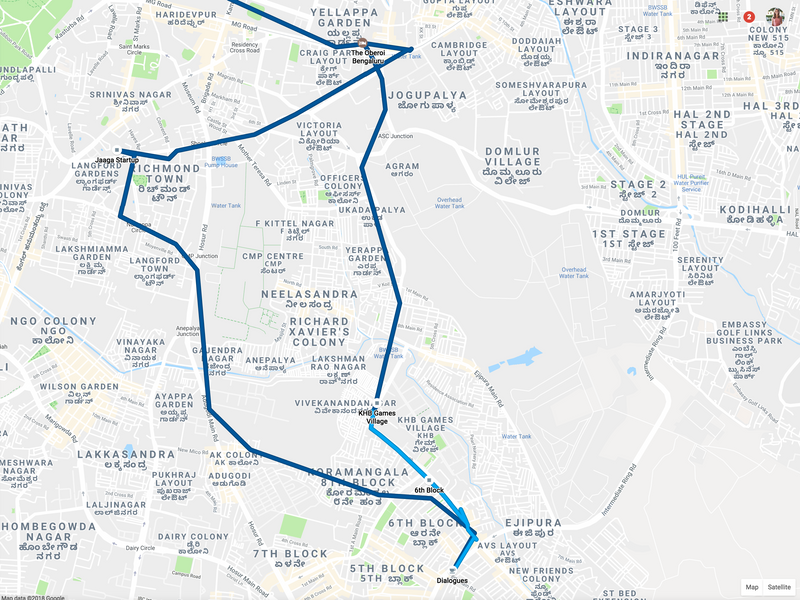